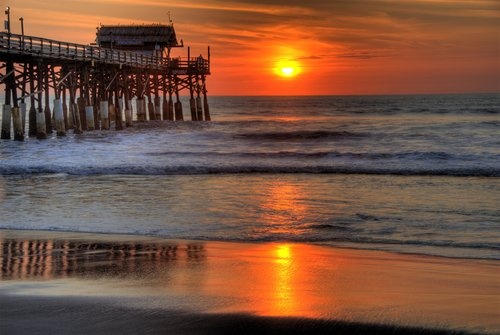 This morning while I was driving into work, I heard a news story come on the radio. The news anchor announced that a teenage kid had taken a challenge to disconnect from technology for a period of ninety days. The anchor went on to explain that the kid told news reporters that it had a major effect on his life and that he was grateful to have completed it.

One of the things that struck me out of the news report was that the kid went on to tell us about the quality time he had, the opportunity to spend time with the people in his life. He told a story about how he spent a night watching the sunset with someone that he loved. I don’t know about you, but, I can’t help but think about the times in my life when I did things like that. I don’t think I will ever forget them.

I remember one event like that in my life. It was summer and I was on vacation in Florida with my family. The whole point of the trip was to take my sister Lexi to Disney World, so we spent seven days down in Orlando. My aunt and uncle had a timeshare and they traded it for accommodations there. I had been dating this girl Betsy for about five months at the time and she loved the beach. She would talk all the time about surfing and laying in the sun. We had extra space where we were staying so I invited her to come along.

Betsy and I decided to take a day away from Disney World to spend a day on the beach. We wanted to go surfing and Cocoa Beach was only an hour away. Betsy booked up surf lessons and we spent the day learning to surf. It was a blast and we were worn out by the end of the day!

The sun started to go down right when we got through with the surf lessons and so we decided to try and find some place to eat. There was a little restaurant at the end of the pier that actually hung over the ocean. We sat down for dinner and placed our orders.

The sun was just over the horizon and she just shined as we were sitting there. I put my hands on the table and she grabbed them. We just sat there looking at each other and smiling. I was with someone that I truly cared about and the moment was perfect.

That is a moment I will never forget because it was so special. It makes perfect sense to me that this teenager found the same thing. Sometimes in life we get so caught up in what we are trying to do that we miss the special things going on around us. I remember the thoughts leading up to that moment too. It would have been easy to just forget the whole day trip. I didn’t know where I was going. I gave up a day at Disney World with my sister to go do this. It was my first time surfing. There were many things that could have prevented that moment from ever happening!

I’m really glad that I ignored the negative things and put myself out there to try something new. Granted, I know what your probably thinking. You were in Orlando. How hard is it to make a moment like that happen? Well, as a friend once told me, no matter where you go, there you are. There is only one question you need to answer. Are you the person that will make a moment like this happen or not?

I challenge you to look at yourself honestly and ask that question. If you’re not that person and want to be then I recommend that you figure out the reason. Perhaps its a question on investment. You don’t want to put yourself out there and take a chance. I can tell you that the best things in life aren’t free. If something is free then you don’t value it.

Perhaps you hear a voice in your head telling you that you’re not that type of person. I wasn’t the type of person that played guitar until I picked up a guitar and played it. I failed many times trying to play a song and my fingers hurt each time I played. But you know what, I got better and then, one day, I was the type of guy that played guitar.

I can only imagine that the kid who took ninety days away from technology filled his time with different activities. He certainly didn’t sit around and twiddle his thumbs. He filled that time with things he didn’t normally do. I think we can learn a thing or two from him.