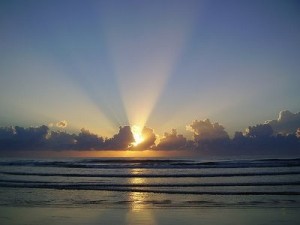 In junior high band became my life. I played the saxophone and was in every band I could get in. I loved playing music and it really made me come alive. There were others in the band that could play the sheet music better than me but, I was the best at doing improvisation solos. I could play from the heart better than anyone in jazz band! In fact I loved jazz music and listened to it all the time.

One day at the end of junior high we started making plans to go with the high school band to London for a band trip. This would be the first band trip I would make as a high school student. The problem was that the trip was really expensive. My parents had gotten their divorce and were now going through bankruptcy. They didn’t have the money to send me and I knew it. I took the thought of going with the band to London out of my mind and convinced myself that I really didn’t want to go anyways. That was the moment when I quit band. I couldn’t face the other students knowing that I didn’t go because I couldn’t afford it. I regret that decision even to this day.

My failure was in not talking it out. I decided that I shouldn’t be a burden to my parents so I dealt with it the way I had learned how. I shoved my passion and longing inside and didn’t explore any other options. I know now that I had more options but I wouldn’t look for them.

Something had to fill this void I had created, so computers became my passion instead. I knew that a computer would never fail me and that if I screwed it up, it would be done in the safety of my home where no one else could see my mistake. I mastered the computer during high school. Making the computer do anything I want was easy for me. Others looked up to me for what I could do on my computer.

In high school I was able to get on the computer support staff. I supported the network and computer machines all over the school. The Olathe School District would buy these terrible machines from a place called Optimus. These computers would break all the time! It kept me so busy during school. At one point I spent three hours a day supporting computers with Mr. Byrnes my teacher. Mr. Byrnes always encouraged me to start a business and he put his faith in me.

Feeling defective and lonely were problems I battled all through high school. Although Mr. Byrnes always trusted me, I knew he trusted me for what I did, not for who I was. One day I showed that I wasn’t worthy of that trust but, that is another story. I built this shell around my personality and my life to keep people from seeing the real me. Showing interest and love toward others was simply not an option since they might see me for who I was and learn of my defects.

College kept me from ever having to look at myself and examine if I was where I wanted to be. I was too busy with school work to concentrate on anything else. It would take me eight hours sometimes to finish an assignment for a single class! I couldn’t be a failure and let my parents down, so I did whatever it took to do well. In engineering school it took about 90% of my effort just to pass a class and if I gave it my all, I did really well. I ended up doing better in college than I had at any other level of school.

I had made the decision to work on the skills that showed externally instead of looking inside and figuring out the real me. Since I already did well working with computers, I decided that I should be a computer science major. Since Mr. Byrnes thought I was going to be a good business man, I decided that I should run my own business. I never really asked the question of who I was and what I really wanted to spend my life doing.

My business was started while I was still working through college. My friend Logan and my brother Chris started a company called Phantasea Media Group with me. We had previously worked together for a company that developed a bed and breakfast search engine. The company closed and moved to Nashville Tennessee. Since I was still in school, I had no interest in moving with the company, so we stayed back and started the company.

We had so many great ideas that our old boss Tom wouldn’t let us do. We were sure that if we had the opportunity to implement them that we would be successful. It turned out that our great ideas were not as great as we had thought. The company would survive, but never really thrive.

Then one day came along when everything changed. I found God. Up until this point in my life I didn’t think anyone really knew who I was. I was pretty sure that anyone who did know the true me would never love me. God changed all that for me. He knew all the dark deep secrets in my heart and yet He still chose to love me. This flipped my world upside down!

At the beginning of any relationship you always experience fear. Think about it. You don’t know what the other person is like. There are things that they might react differently to. You inherently want that person to like you if you care about the relationship. A relationship with God is no different. I did not know who God was or how He would react to the things I had done, the things I continued to do.

After awhile I started to feel more comfortable in my relationship with God. I had learned what God expected of me and what I could expect from him. One of the things I learned quickly was that God expected more out of me than I had ever expected out of myself. Looking back this was a good thing. There are so many experiences I would never have had if God didn’t push me a little farther than I was comfortable with.

That is how we grow. We have to push ourselves or be pushed a little farther than we want to go, so we can see that it is not as big a deal as we thought. I had my successes and my failures just like anyone else. God was there for me either way. One other lesson I learned very quickly was that God expected me to get back up after failing and try again. God wanted me to be successful.

2 thoughts on “The Pivot”